The herd at The Equine Connection is largely geriatric. The older horses are very appreciative of their opportunity to teach and offer healing. They know that they have been given a second lease on life. They know that many of their peers in the larger horse world have already been euthanized because of arthritic legs and other health challenges. They show us that despite their weathered bodies, they have much to offer spiritually. They teach that visible vulnerability is not a statement of self-worth. They show us emotional and spiritual strength. They demonstrate the power of love. They show us that our bodies are secondary to our souls.

Because of the ages of most of the horses here at The Equine Connection, the herd and I regularly support the death of one of the herd members. This year, in March, we laid Amiga’s body to rest. In September, Sadie Claire chose to leave her body. Both were living with high levels of body pain that simply became intolerant. Amiga’s goal was to nurse Sweetie Pie until she was ready to join the younger herd members, which she did at the age of eight months. At this point, Vienna took over the mothering of Sweetie Pie and continues to appreciate Amiga’s gift. Once Amiga’s goal was achieved, she lost interest in her body. She does visit spiritually, which is an honour. Despite being on the property less than a year, she embraced the healing work done through equine-assisted learning. I did not think it would be possible from a safety perspective for a mare and foal to engage in therapy. I was wrong! She asked to join in and did so with enthusiasm, and the whole time sharing her baby with the herd and the humans. What generosity Amiga!

Sadie Claire always seemed to be more in the spiritual realm than the earthly. She spent more hours laying down than standing. One of her greatest teachings was to moan loudly and expressively when she was working with someone who needed to release hurt and loss. She showed us how relieving and healing it is to sigh out loud, feeling the sound vibrate throughout the body. She taught the importance of cleansing ourselves through this simple practice. She was also very particular about who she let near her. Yet another example of how to look after your own energetic vibration and how to keep your personal space clean. Her emotional strength enormous. While I projected my abandonment issues onto her, feeling rejected by her insistence on not letting me touch her, she was teaching me to look after myself. Sadie waited years for me to grasp that lesson! Being not scared of any of the emotions, she had no trouble embodying tough feelings like sadness and grief. She touched many people by making space for difficult experiences. Thank you Sadie! 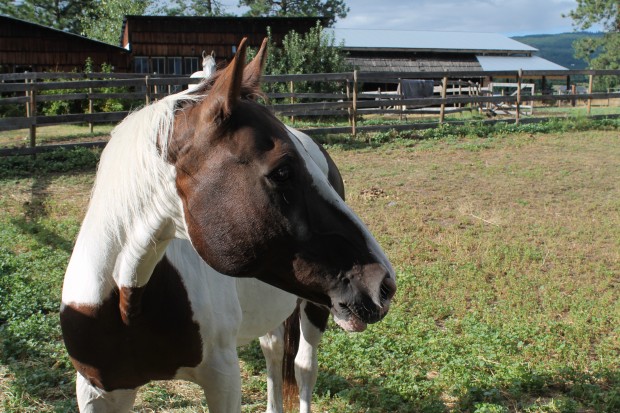 One of Sadie’s favourite positions. Laying this way was relieving to her legs, shoulders and hips, which caused her significant pain.