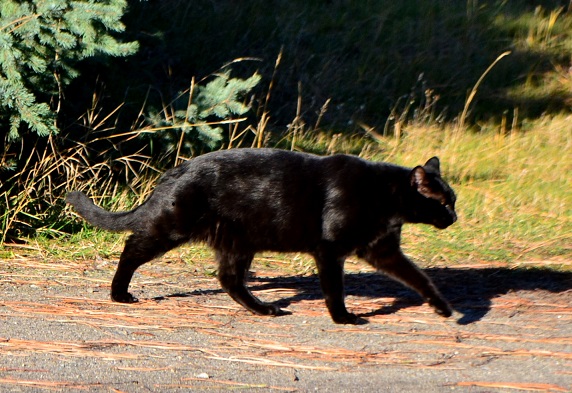 Zaza has come home! He has been gone for around six months. He is a bit thinner, his face more chiseled, and his coat rougher. For the rest, he is mostly the same guy – serious and protective, but perhaps a bit less forceful.

When he first left in the Fall, he was gone for three weeks. He then returned for a week. That week home, he was super cuddly. He then left again, and has just recently returned, more than six months later. I have sat with him, meditatively asking where he has been, and what he was doing. His lips are sealed. Once I let go, and stopped asking, I heard: ” We belong together.” Warmth flooded my whole being, hearing those words.

His explanation for his return contrasts with the story I had made up to explain his absence. I thought he was angry about another male cat, Derek, coming to live on the property. This story was dishonouring of what Zaza had actually done.

The first cat he welcomed into the house was Makita, the fearless, female kitten, who had been found in a snow bank. He mentored her, and did his best to protect her when she was outside. Her dismissal of her own vulnerability, and her habit of flirting with danger led to an early death that Zaza grieved. After Makita died, he would not go into their basket, nor use the kitty litter until I cleaned them both completely of her scent. Watching him grieve told me about his ability to deeply attach.

The next year, we brought Milwaukie home, another pretty girl. Again, he cared for her in a loving manner – grooming her, playing with her. When Millie, as we call her, was 16 weeks old, Derek arrived, unexpectedly. Without much fuss, Zaza opened up his territory to this new, male figure. For such a dominant guy, Zaza’s actions speak of flexibility, and a willingness to collaborate, and practice inclusiveness.

Despite all the evidence, it was still a stereotypical story I contrived to explain his absence. The truth is, I will likely never know why Zaza left home for such a long period of time. However, I could make up a story that honours what his past behaviour has told us about his character. A story that celebrates the spiritual nature of animals, and how they support us humans in journeying through life. Such a story would imagine Zaza going on a trek in the name of helping a human in need, or to support another household energetically. This story would speak of his devotion to collaboration, and his large heart that allows him to love deeply.

The story I made up was the result of my injured pride, and my loss of his love, and presence in my daily life. I made his actions personal. While they did have a personal impact, Zaza’s actions were also impersonal, not about me. His actions are about him. So, I am reminded how easily we colour our observations, and experiences with our own feelings, and desires, creating a story that is really about our injured feelings, and not getting what we want.

While Zaza looks like a big, tough guy, and has a large presence, it is not possible to capture his personality and actions with a stereotypical label. There remains much mystery around his behaviour. As per usual, things are not what they seem, especially not through my coloured glasses!